The new Halloween movie rebooted sequel is release today. It’s co written by Danny McBride and produce by Blumehouse. The rebooted sequel takes places 40 years later after the original. Movie. Jamie Lee Curtis reprise her role as the sole survior of Michael Myers killings from the first one as Laurie Strode. (Minor Spoilers) 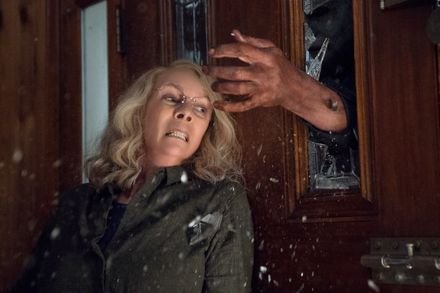 There’s lots of nostalgia to the original, there’s a few montages of Michael Myers on a Halloween killing spree with the iconic Halloween theme. He montages scene is very nostalgic for long horror fans who will be happy with. Halloween has a lot of jump scare scenes that are perfectly done.

They don’t show many gore scenes, but you do see gorey aftermath of the destruction Michael Myers has caused. It blends very well for the sequel. Jamie Lee Curtis does a great job reprising her role as Laurie Strode. Even tho Laurie didn’t die in the first one the scars from the movie are mentally deep an is difficult for her to move on from. She’s a strong character and if you’re a fan of the first film you’ll be invested in Laurie Strode, and how her story continues. There’s s few surprising twist in the movie that will be very joyfull for long time Halloween fans.

There’s some scenes that take you out of the film, and the Dr. Ranbier Sartain character played by Haluk Bilginer I found his character a poorman Dr. Loomis which we didn’t need for this film. There’s a few awkward moments with the character in third act of the movie.