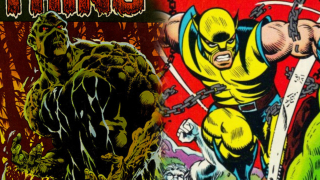 This evening tragic news about comic book great Len Wein who passed away. I’ve never met the man, but I am a big fan of his work in comic books and the many contribute he’s done for the medium. For those who are not familiar with who he is you will know his work very well, because he is the lead co creator of Wolverine and Swamp Thing. He was also the editor of the greatest graphic novel The Watchmen with Alan Moore and Dave Gibbons. Len Wein has written many superheroes comic book stories going back to the beginning of the 70’s. Beside co creating two iconic characters that will outlive us all. He revived the X-Men comic book series in the mid 70’s after Stan Lee and Jack Kirby’s run. His run on the X-men is just as legendary as Chris Claremont’s X-Men’s run. He wrote many great Batman stories in Detective Comics, Batman and the Outsiders and his cross over stories with Batman and Swamp Thing. He is one of the many writers such as Dennis O’Neil, Roy Thomas, Kurt Brusiek, Alan Moore, Gerry Conway, Marv Wolfman, and Steve Englehart whom jump start the modern comic book era.

His contribute does go unnoticed, but should get more attention to because without his X-Men run with new X-Men we do not get characters he co create such as Storm, Nightcrawler, and Colossus. X-Men mythology looks very different without his contributions. In His imprit is all over DC Comics, he was involve as editor in the beginning of the New Teen Titans series with Marv Wolfman and George Perez.

I have a lot of favorite comic book stories, from Len Wein, but my personal favorite run that he was part of was his X-Men series. Introducing new characters, and adding diverse characters to the X-Men at a time when there was very little diversity happening during that period was a big deal, and was a big draw that help the X-Men mythology successful and still popular today.

It’s very sad news to hear a great Comic Book legend in the industry is no longer with us, but his long body of work through comic books and stories in other mediums will keep his name and legacy alive and talk about. If comic book readers would like to check out his work in the industry I highly recommend picking up his Swamp Thing stories, Batman and The Outsiders, Detective Comics, The Human Target, Justice League of America and The New X-Men series run that is heavily influences in the X-Men films such as X-Men, and X-Men 2.